Getting To Know Jeremy Lin 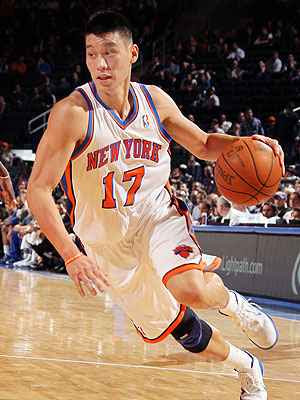 By now you have probably heard about New York Knick Jeremy Lin. You have seen headlines and catchphrases describing Lin's basketball exploits through terms like Lin-sanity, Lin-stant Classic, and The Lin-derella Story. While he has recently burst on the scene as a star in New York, his story goes much deeper than that. Below is an article by Daniel Burke that sheds some light on the NBA's latest rising star.

New York Knicks guard Jeremy Lin’s underdog story and outspoken evangelical faith have led some sportswriters to dub him the “Taiwanese Tebow.”
But while Lin and Denver Broncos quarterback Tim Tebow share similar Christian convictions, Lin’s rise to stardom is even more miraculous.
Just a few weeks ago, the Harvard University graduate was buried on the bench and crashing on friends’ couches. Stadium security guards mistook Lin for a team trainer.
After injuries to teammates, though, Lin was inserted into the starting lineup. The Knicks have promptly won seven straight games with their new point guard leading the way, sending New Yorkers and Asian-Americans across the country into a frenzy of “Linsanity.”
Fans splurge for replicas of Lin’s jersey, the TV ratings of Knicks games have skyrocketed and shares of the Madison Square Garden Co., which owns the basketball team, have reached an all-time high.
Like any good point guard, Lin knows the art of the pass — distributing the praise to his teammates and to God.
“I’m just thankful to God for everything,” Lin said in a recent post-game interview. “Like the Bible says, ‘God works in all things for the good of those who love him.’ ”
Lin’s passing reference to Romans 8:28 was caught by his longtime pastor, Stephen Chen of Redeemer Bible Fellowship, a ministry within the Chinese Church in Christ in Mountain View, Calif.
Chen describes the church as full of first- and second-generation immigrants, like Lin and his parents, who are “conservative in nature” and evangelical in faith.
“Very early in his life he decided to pay heed to the call of Christ to take up the cross daily and follow after him,” Chen said.
Even during basketball season, when games went deep into Saturday night, Lin’s family made sure he was in the pews on Sunday morning, Chen said.
Lin also credits his parents with teaching him to play “godly basketball,” which measures success by sportsmanship, not stats. That means putting teammates first and showing respect to opponents and referees.
As his star rose, first at Harvard and then with the NBA’s Golden State Warriors, Lin shared his faith testimony with youth groups and churches near his California home.
In a 2011 appearance at River of Life Christian Church in Santa Clara, he quoted from the works of John Piper, a prominent neo-Calvinist pastor in Minneapolis, and spoke of trusting in “God’s sovereign plan.”
Chen, who said he recently spoke to Lin, expects his sharp-shooting congregant to continue his evangelism in the bright lights of the Big Apple. “He is really looking forward to using the platform that he has to share the gospel with others,” Chen said.
Lin already uses his social media platforms to spread the Word.
His Twitter account’s description is, “to know him is to want to know him more.” His account’s avatar depicts Jesus telling a young man, “No, I’m not just talking about Twitter. I literally want you to follow me.” His Facebook page quotes Colossians 3:23: “Whatever you do, work at it with all your heart, as working for the Lord, not for men.”
Tom Krattenmaker, author of the book “Onward Christian Athletes,” is among the many who see some similarities between Lin and Tebow. Like Tebow, Lin has spoken of relying on faith to help carry him through the highs and lows of his sports career, and both men often praise God during post-game interviews.
Lin himself has called Tebow “a polarizing figure” but also said that he draws inspiration from the young quarterback’s example.
“I think the things he says in interviews, his approach to the game, is just unbelievable, and I respect him so much,” Lin recently told a California radio station.
Unlike Tebow, however, Lin does not yet have a signature gesture, a la “Tebowing,” the prayerful kneeling that became an Internet meme last fall. (The fast flow of basketball rarely affords time for sustained public piety.)
Michael Luo, a New York Times reporter, sees other differences between Lin and Tebow.
“I have the sense that (Lin’s) is a quieter, potentially less polarizing but no less devout style of faith,” Luo wrote in a recent column. And while Tebow appeared in a Super Bowl ad opposing abortion two years ago, Asian-Americans tend to avoid the culture wars, Luo wrote.
Still, as one of the very few Asian-Americans to reach the NBA, Lin will have millions following his every move, said Melanie Mar Chow of the Asian-American Christian Fellowship campus ministry. Already college campuses are buzzing with talk of his “Linderella story.”
“We could probably count on one hand the number of Asian-Americans who are prominent Christians,” Mar Chow said. “It’s great to have a role model like him.”
ead more here: http://www.kansascity.com/2012/02/17/3435555/basketball-phenom-lin-puts-his.html#storylink=omni_popular#storylink=cpy
Posted by A&E at 7:10 PM