This story begins exactly 6 years ago to the date. Erin was due to have our first child any day, but little did we know that on this special Sunday our lives would change forever.

I went to church and Erin decided to stay home as she was experiencing sporadic contractions and was obviously very uncomfortable being in her third trimester. I told her to call me if she needed ANYTHING and I promised to have my phone ON and WITH ME throughout the morning. Unfortunately, I only held up half of that bargain. I did have my phone on all morning, but accidentally left my phone on stage during the sermon.

Sitting down as the sermon began I quickly realized my mistake, but the chances of Erin calling or going into labor during that window were minimal I decided. I had already been at church for a few hours and she had not called yet, so I was sure she was doing fine. Little did I know that she would call more than 10 times during the sermon (I had wisely put my phone on silent so not to cause a disturbance) informing me that she was going into labor. Once the sermon ended I came back on stage and took a glance at my phone during the invitation prayer before our final song. When I saw the long list of calls from Erin's number I knew something was happening and began praying quietly that NO decisions would be made that day (the exact opposite of the pastor's prayer!). I don't remember the closing song from that Sunday, but I am pretty sure it was the fastest closing song that church had ever heard. As soon as the service ended I hit the road and took extreme liberty with the speed limit on my way across the Dallas/Ft. Worth metroplex daring any officer to pull me over. Thankfully I made it home safely (and without a ticket) to find my father-in-law playing the role of hero while I played the goat. Fortunately, he had stopped by to check on Erin as she went into labor and waited with her until I arrived.

Once there, we quickly packed our bags and headed to the hospital to welcome the arrival of Anderson Monroe Franklin! 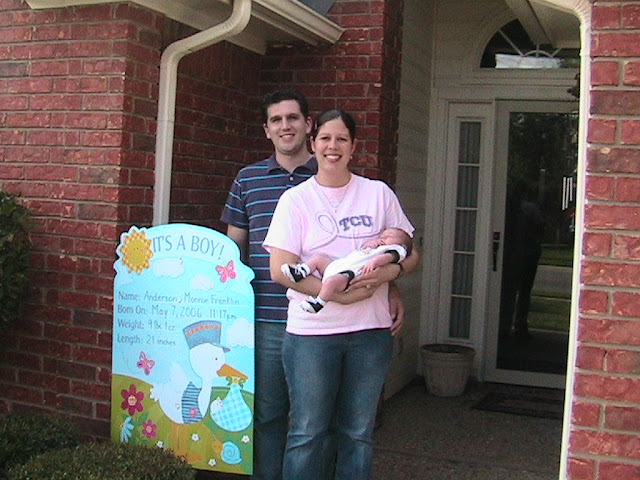 Good story! Thanks for sharing and Happy Birthday to Anderson!

Wow! What did you have to do to pay her back for that one, lol? :^) At least he wasn't born until later at night so you had some time once you got to the hospital!