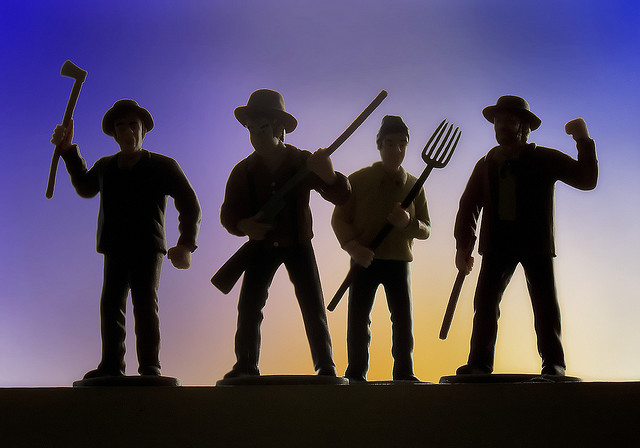 
Criticism is one thing. Criticism based on lies is another. Sometimes it seems like I’m surrounded by critics.  For instance, I checked my twitter feed the other night and saw a guy who was misquoting me saying something about how I didn’t believe in the importance of discipleship. Pure slander. I never said that or anything like it.
I wish my response to these situations was more spiritual.  Something like, “Help them, Jesus,” but really I just wanted to lay hands on him. In the Quentin Tarantino way, not the Bible way. That stuff stings.
This isn’t me having a pity party. I’m well aware that brothers and sisters in other parts of the world are dealing with real, violent persecution. And you may have to deal with sources of negativity that are far greater than mine. But my point is, I’m learning how crippling encounters with these kinds of people can be when trying to pursue the life God has called us to.
Put Them Out
Maybe one reason some of us feel surrounded by opposition as we try to live and lead for God is that we have surrounded ourselves with the wrong people. They aren’t hiding outside our windows waiting to ambush us. They are sitting at our tables by personal invitation.
If you’re going to do what God has called you to do, you have to intentionally cultivate the right relationships in your life. And put out the people who subtract from your potential.
This isn’t just me talking here. Consider:
• Solomon was condemned for surrounding himself with foreign wives who led him into idolatry (see 1 Kings 11:4).
• Paul encourages us to “not be misled: ‘Bad company corrupts good character’ ” (1 Corinthians 15:33).
• Jesus put out the people in Jairus’s home who laughed at Him when He wanted to bring Jairus’s daughter back to life (see Mark 5:40).
The concept of putting people out of your life may not sound very loving. But I’m not talking about drawing a circle around people and refusing to care for them. I’m talking about drawing a circle around your spirit and allowing only certain people to affect it. There’s a big difference.
The Loving Thing to Do
How can you identify the people you need to put out of your life for a season or altogether? I’ve found it helpful to ask a few pointed questions:
1. Who in my life leads me to attitudes or actions outside of what God prescribes for me in His Word?
2. Who leaves me drained rather than empowered after a typical conversation?
3. Who keeps me thinking smaller rather than helping me dream bigger?
4. Who constantly asserts that what I’m attempting to do for God will not work?
If there are people in your life who fit these descriptions, it might be time to limit their access to you. If that’s not possible, brainstorm some creative ways to limit their impact. You won’t be unloving to do it. Actually, nothing else you can do as a church leader is more loving for those around you than positioning yourself to be all that God has called you to be.
To truly love people means to love God first and foremost as you pursue His calling for you -- no matter what others say.
Steven Furtick is the author of the New York Times® Best Selling book, “Greater” and the nationally acclaimed “Sun Stand Still.” He is the lead pastor of Elevation Church in Charlotte, North Carolina. In seven years, Elevation Church has grown from 8 families to more than 12,000 people in weekly attendance, meeting at seven locations in the Charlotte, North Carolina area. He has spoken at conferences and churches around the world, including Catalyst Conference, Hillsong Conference, and the Willow Creek Global Leadership Summit. He holds the master of divinity degree from The Southern Baptist Theological Seminary. He and his wife, Holly, have two sons, Elijah and Graham, and a daughter, Abbey.
Posted by A&E at 9:46 AM

Oh, this was very helpful to me! Thanks for sharing!