The End Of Yelling 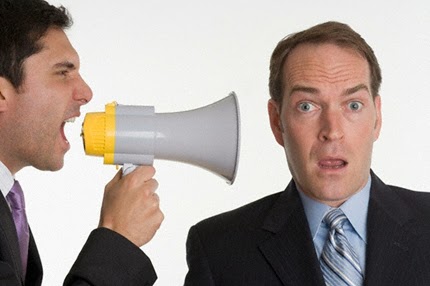 Steve Jobs, Martha Stewart, Bill Gates, and Jack Welch. All successful. Very visionary and competitive leaders. And every one with a well-documented reputation of raising their voices—strongly. Yes, they yelled, and it was a big part of their style.

Turn to ESPN any evening and you will find famous coaches from every sport yelling at their teams. You’ve seen it—coaches in full voice, commanding attention and getting results. They would say that their yelling inspired their athletes to great performances.

And of course, there’s the military. We’ve all probably experienced a TV episode or movie depicting a trainer yelling profusely at a soldier during boot camp. An in-the-face confrontation demanding correct behavior—immediately.

This type of behavior and volume is quite understandable and accepted in the above-mentioned cultures. But that’s not the world we live in, is it?  We live in the church ministry world.

And even if the cause for yelling is the same as in the corporate world, sport’s arena, or worship center, I have not found yelling to be productive in the latter.

Leadership is not about yelling at people. Yelling doesn’t accomplish anything and usually does more harm than good. It’s neither a benefit for you or the receiver.

Mistakes are going to happen. Productive processes will be thwarted. But there are better ways to keep your ministry team on track and productive without you getting all worked up. So how do you deal with disagreements and imperatives without the volume?
Here’s what I’ve found helps me keep my voice low and my team’s productivity up.

The reason any leader yells is usually because someone disappointed them, made a mistake, or handled a task incorrectly. So push pause and ask this question: Are you sure your team member is responsible? Did you set clear expectations for them? Did you communicate in an understandable way?

Yes, look in the mirror first before you let your blood pressure soar. If you find the mistake came from unclear communication, fix that first.

Clear communication is important and must be clear. It’s my plan to communicate in a calm, steady way. I try to stay away from the highs and lows. I can get a bit worked up at times, and believe me, my team usually knows when I’m disappointed. I attempt to do my best to share my feelings with trust and the acknowledgement that it’s okay to fail. Screaming at someone out of your frustration might get their attention, but it won’t get their respect.

Screaming at someone out of your frustration might get their attention, but it won’t get their respect.

Not only is it more effective for you to keep your voice down, but you should also know that everyone else is looking to you as an example. If I see any of my team yelling at each other, I haven’t done my job. As a leader, my job is to teach them to influence each other through respectful debate, dialogue, and communication.

As a leader, my job is to teach them to influence each other through respectful debate, dialogue, and communication.

Honest dialogue is a must for a team. When there’s an atmosphere and culture of honesty in a team, conversation can happen minus the yelling. I’ve found the result of yelling from the leader or within a team is a quiet team that shoves any issue under the rug. When there is a disagreement, a team should be taught to talk—keeping it calm and polite.

Talk it out, calmly. Never get mad on email or even on the phone. Issues can almost always be resolved by having an honest conversation. No yelling. If you see your team lean toward non-verbal communication stop that in its tracks.
And be an example. Have the guts to walk down the hall to communicate.

Yelling is for emergencies. Is someone’s safety in question? Is someone bleeding? If not, the only reason you’re yelling is because you feel like you’re out of control.

As a leader, you must be strong. Be firm and clear. Communicate your feelings and expectations clearly—with respect. Voice your disappointments with honesty. And you will gain respect in return. You may also see mistakes down and productivity up.
Posted by A&E at 8:46 AM