Below are observations from Game 3 of the 2011 World Series:

- After 2 well played games featuring lots of pitching and defense tonight was a total departure. The final score resembled a football score that might mirror the Cowboys vs. Rams game tomorrow taking place across the street at Jerry World. If I were a betting man (which I'm not), I would bet good money the Rams will not score as many points tomorrow as the Cardinals did tonight (16).

- Dallas Maverick superstar Dirk Nowitzki fired an impressive first pitch to Michael Young before the game. Reports are he hit the upper 60's on the radar gun. Not bad for a 7-footer from Germany. 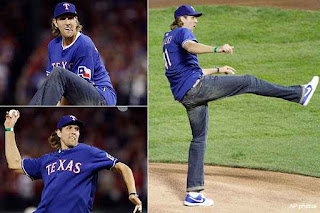 - Allen Craig continues to make a push for series MVP with another good game at the plate, though he may have competition from Albert Pujols who apparently thought tonight was the Home Run Derby (Hit 3 home runs joining Babe Ruth and Reggie Jackson as the only other players to do so).
- The 4th inning took almost 45 minutes and is when the wheels fell off for both teams and the umpires. 7 runs were scored, although not all blame can be placed on the pitchers. The defenses lost their sharpness and 1st base umpire Ron Kulpa blew a call when Ian Kinsler threw high to Mike Napoli at 1st base allowing Matt Holliday to reach safely...or did he? 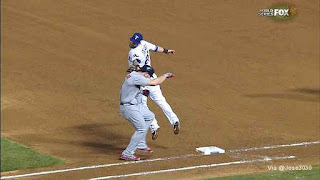 Holliday was not only lucky to be called safe on the play, he was also lucky he didn't break his ankle as he awkwardly stepped on the bag. This missed call opened the floodgates in what became a slugfest featuring both offenses.
- Regardless of whether you are a fan of Cardinals manager Tony LaRussa or not, one thing you cannot call him is a liar. CLICK HERE to see what I mean.
Posted by A&E at 12:10 AM