Below are observations from Game 4 of the 2011 World Series:

- As I predicted after Game 3, the St. Louis Rams did not match the run total of their city counterpart on Sunday. Before Game 4, the Rams played across the street against the Dallas Cowboys and lost 34-7, coming up 9 points shy of matching the Cardinals total of 16 on Saturday. The coin toss with Lance Berkman and Josh Hamilton (pictured below) proved to be the lone highlight for the Rams. 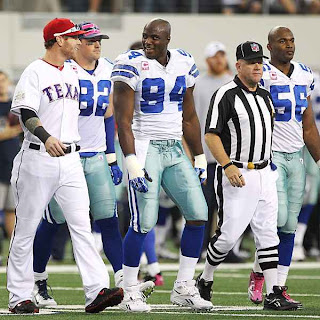 - Before Game 4 I predicted the Rangers would win (which they did) and that Cardinals starting pitcher Edwin Jackson would get lit up (which did not happen, but it sort of did). Jackson issued 7 walks, but only 3 hits which allowed him to pitch effectively into the 6th inning. Unfortunately, when he turned the ball over to Mitchell Boggs there were 2 runners on base. On Boggs' first pitch Mike Napoli sent a drive deep into the left field seats to give the Rangers a 4-0 lead which they never relinquished.
- After a historic night in Game 3 hitting three home runs, I predicted that Albert Pujols would be walked at least once in Game 4. As it turns out, he was not.
- Ranger starting pitcher Derek Holland pitched the best game of his young career by taking a shutout into the 9th inning before handing the ball to closer Neftali Feliz. Not bad for the 25 year old who suffers from facial follicle troubles. 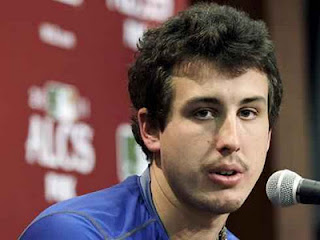 - Knowing that Texas has not had a legitimate All-Star first baseman since Mark Teixeira was traded away in 2007, it makes one wonder if Albert Pujols could be a candidate to fill that void if he does not re-sign with St. Louis in the postseason.
Posted by A&E at 11:11 PM