Below are observations from Game 5 of the 2011 World Series:

- Before the game I predicted that the Cardinals would win (they didn't) and that Ranger starting pitcher C.J. Wilson would struggle. While Wilson definitely did not dominate, he pitched well enough to keep the Rangers in the game.

- Many analysts are saying Wilson pitched his last game for the Rangers tonight as he becomes a free agent after the season. The Rangers will welcome the left-hander back, but only at the right price. He will likely be looking for a multi-year deal starting in the $100 million range.

- Matt Holliday did not protect Albert Pujols in the lineup at all in this game. The Rangers intentionally walked Pujols three times to face Holliday. The biggest gripe for most Cardinals fans will be that Holliday is making $120 million over 7 years and is expected to perform in those situations. Look for Lance Berkman to possibly switch places in the lineup with Holliday for Game 6.

- I will be interested to hear Tony LaRussa explain the hit and runs with Allen Craig and Albert Pujols. It obviously did not work either time and possibly cost the Cardinals valuable runs.

- I will begin working with my sons tomorrow teaching them how to mimic Adrian Beltre's massive uppercut home run swing. If they master it, their mother and I will be financially secure for the rest of our lives. 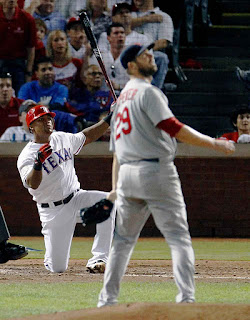 - It was not shown during the FOX broadcast, but below is a picture of Dallas Cowboy legend and NFL Hall of Famer Roger Staubach throwing out the first pitch before Game 5. 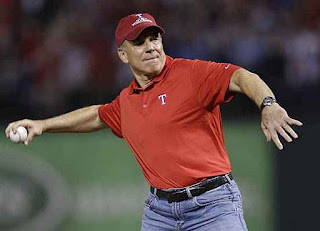