Below are observations from Game 7 of the 2011 World Series: 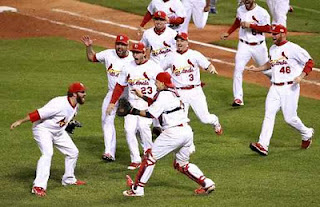 - In my 25+ years of watching the World Series I don't remember ever watching a more entertaining series (or entire postseason for that matter). The games were not always well played, but the desire of each team to win made for compelling action. Congratulations to the St. Louis Cardinals winning the 11th World Championship in franchise history.

- While the Cardinals are now in full celebration mode, don't forget they were not even supposed to be in the playoffs. HERE IS AN ARTICLE written at the close of the regular season that will give you a better idea how improbable this World Championship is.

- David Freese (from Lafayette High School where I competed in a Marching Band competition in 1994) burst onto the national scene after setting a new record with 21 RBI's in a single postseason. I would expect his jersey is flying off the shelves in St. Louis.

- The game reached a turning point in the bottom of the 5th inning when the Cardinals scored 2 runs without getting a hit. Scott Feldman got himself in a mess by hitting Albert Pujols and then walking Lance Berkman. Hot hitting David Freese was then intentionally walked to load the bases for Yadier Molina. Molina worked the count to 3-2 before taking Ball 4. Replays showed it was actually Strike 3 which would have ended the inning. Instead, a run scored and Feldman's night was over. C.J. Wilson was brought in for relief and with his first pitch plunked Rafael Furcal driving in another run. While umpire Jerry Layne missed Strike 3, Feldman got himself into the mess and then C.J. compounded the situation before finally getting out of the inning with the Rangers down by 3 runs.

- Congratulations to Cardinal Arthur Rhodes who would have received a World Championship ring win or lose. He started the season with the Texas Rangers and after being released, was signed by the St. Louis Cardinals.

- The Texas Rangers are on the verge of becoming a baseball dynasty similar to that of the Atlanta Braves over the last 20 years. With strong management, a strong minor league system, and a quality nucleus of above-average Major League players the Rangers will be a tough team to beat for years to come. HERE IS A LOOK BACK AT AN OUTSTANDING 2011 SEASON. 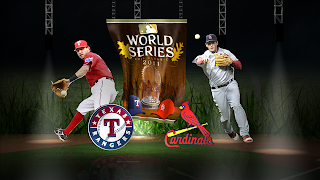 When do pitchers and catchers report to Spring Training?
Posted by A&E at 11:42 PM