I recently came across this article about baseball umpires which gives insight to some of their personal lives. I found it an interesting read and hope you do as well. Enjoy. 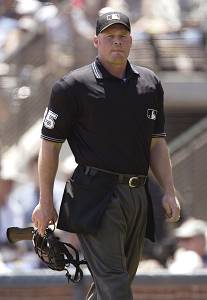 He'll be on the field for every game, right in the middle of the action, but he won't throw a pitch or take a swing.Ted Barrett feels the pressure nonetheless. He knows the stakes are high when the World Series starts tonight between the Texas Rangers and the St. Louis Cardinals. But while the players will all be doing their utmost to leave their mark on the Fall Classic, Barrett and five other guys hope that nobody even knows they are there."All eyes are on the game," said Barrett, one of the six umpires working the series. "The biggest fear is for something to happen where you become the story."That means no mistakes for Barrett and his five crewmates. It means no controversial calls that have haunted umpires like Don Denkinger (who missed a crucial call at first base in the 1985 World Series) or Jim Joyce (whose blown call cost Detroit Tigers pitcher Armando Galarraga a perfect game in 2010).Such is life for a major league umpire. When they do their job perfectly, they get no accolades and no praise. When they mess up, they get unending ridicule, scorn and maybe even death threats from legions of fans.But his job on the field isn't the only place where Barrett likes to deflect attention. As a Christian and one of the founders of the ministry Calling for Christ (CFC), Barrett ultimately hopes that his actions point to Jesus."My sole purpose is to glorify God," Barrett said. "Whatever happens, if I can walk off the field and glorify God, then I'm in."Barrett and his fellow major league umpire Rob Drake began CFC a few years ago as a ministry to umpires in both the major and minor leagues. Their primary method of outreach was a yearly retreat held at the Falls Creek Baptist Conference Center in Oklahoma. Drake and Barrett enlisted the help of Dean Esskew, who was pastor of New Hope Baptist Church in El Reno, Okla., at the time, to organize the event. Twelve umpires showed up the first year, and by last year, that number had grown to about 70. Esskew has since left his church and is working fulltime as the CFC pastor. He has baptized 27 umpires who have come to faith in Christ as a result of the CFC ministry, in addition to five umpires' wives. "Guys used to hide their walk with God," Esskew said about the umpires. "It was something you didn't talk about. You didn't bring God into the locker room or on the field. Now, they'll pray before this year's World Series before they walk out on the field."It's so exciting to see God change the lives of these men."Two of the umpires Esskew baptized are Alfonso Marquez and Gary Cederstrom, who also are on this year's World Series crew."God put this person in my life -- back in 1993 was when I met Teddy [Barrett]," Marquez said. "Now here we are and we're going to work the World Series together. We're going to share the moment and live it the way God wants us to."Marquez grew up as a Roman Catholic and was faithful to the church and prayed every day but said it was more out of routine than out of conviction. He then strayed from the Lord after he made it into the major leagues as an umpire. He and his wife divorced, and Marquez began drinking heavily. But he attended the CFC retreat one year, where Marquez heard the Gospel and understood the truth of Christ's death on the cross paying for his sins. Esskew later baptized him."How I didn't lose my job or end up dead is by the grace of God," Marquez said. "Thankfully, God put people like Ted in my life since day one. He planted that little seed a long time ago."Barrett is encouraged by the results he's seen from the CFC ministry. In addition to the growing interest in the annual retreat, several major league umpires take part in a regular prayer conference call during the season. With crews scattered all over the country, Barrett started scheduling times where they could pray together over the phone."It started out where I would lead it and I would pray," Barrett said. "But I encouraged the guys, 'Hey, this is not the Ted Barrett call. This is the major league umpire call.' After a few weeks guys said, 'OK, I'll lead.'"Esskew has seen God's work not only in those who have come to faith but in the growth of Christians like Barrett."He's become more confident," Esskew said of Barrett. "When I first met Ted, he was confident in his ability to umpire, but he had no confidence any other way. But he knows his true calling now is not to be an umpire. It's to be a minister."Tim Ellsworth is editor of BPSports (www.BPSports.net) and director of news and media relations at Union University.
Posted by A&E at 11:31 AM